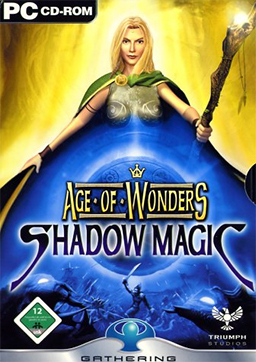 The game features a world on three different levels, the Surface, the Underground and the Shadow World. Scenarios may take place on one or more of these levels. The game can either be played in a simultaneous mode, wherein players move their units at the same time during a turn, and in a traditional turnbased mode. Note that both modes are still turnbased. The game is played both in anoverworld mode, on which parties are moved and raised, structures are built and heroes are contracted, as well as a battle mode.

The key element of the game are the Wizards. Wizards are very powerful at magic, but rather weak at close combat. Every player has one Wizard, each with a sphere of magic (Life, Death, Fire, Water, Air, Earth, Cosmos and finally Chaos/Secret), which decides which spells the Wizard can research. Some Wizards have multiple spheres, but can only learn less advanced spells. Spells range from passive spells (for instance, blessing a unit with additional strengths), to direct spells (i.e. healing spells or attack spells), to summoning spells. Wizards are the only units in the game who can't level up or gain medals. Instead, they improve by researching new spells and skills.

Wizards have a domain, which is the area in which the Wizard can cast his spells. When a wizard is inside a wizard's tower, the radius of his domain is increased by several hexagons, and in addition a small domain is radiated around each hero, so it is usually best to keep wizards inside a tower at all times. Every village, town and city can build a Wizard Tower, and the Wizard only has to be inside one Wizard Tower, the other towers will also increase his domain.

Wizards can also attract heroes. Heroes are the men and women who (preferably) lead your troops into battle. Heroes, unlike Wizards, can level up. When they level up, the player can choose between three abilities for the hero to make them stronger. For example they can fire at range or improve the party morale. At a low level, they are rather vulnerable to other units, especially high tier units, so it is suggested to keep them a bit out of harm's way, for at a high level, they can become strong assets to a party, and can even destroy parties on their own. Their maximum level is 30.

Heroes can join you either by applying at one of your cities or parties, by being recruited at an Inn or similar building, or can be attained through the use of the "call hero" spell.

Regular units represent the majority of the units in the game. These units can be divided in four levels, based on the various buildings that are needed for creating them. Units can also be awarded medals, which are given independent of respective levels. The medals represent experience and give bonuses to unit statistics.

There are many kinds of structures on the World Map. The most important ones are the cities and the structures that generate either gold or mana.

Cities come in four levels. The lowest level is the Outpost, which can only construct a Wooden Wall and the race's basic unit. The next stage, the Village, can build many more buildings. The other stages are Town and City. The stages differ in how fast they can build, and the income they generate.

There are fifteen races in the game and these races are divided into five groups; pure good, good, evil, pure evil and neutral races.

Like both its predecessors the game was designed for single-player as well as multiplayer, and while the graphic engine is the same as in Age of Wonders 2: The Wizard's Throne, gameplay is improved and some important features are added. While every existing race in the game received at least one new recruitable unit and new buildings, 3 races are completely new. Much requested from the fans (and referred to in the forums as the "random map cult"), the game now offers a "Create Random Scenario" option. Age of Wonders: Shadow Magic can be played in multiplayer mode 3 different ways; 1) Joining via I.P (Internet Protocol) address 2) Joining via LAN (Local Area Network) connection 3) Play by Email.

Shadow Magic was probably planned as an expansion pack for Age of Wonders II: The Wizard's Throne, but was published as a stand-alone game instead.

The game was unofficially developed further by a fan-community. There is a further update planned.

For several years Age of Wonders: Shadow Magic was only available from third party sources such as Amazon.com and eBay or through illicit means. On September 13, 2010 it was announced that the entire franchise will be re-released onStardock's Impulse. On September 24, 2010 it was announced that the trilogy will also be made available via GOG.com and GamersGate. As of October 11, 2010, all three games in the series are available on Steam. As of June 2011, all three are available on GOG.com and Steam.

Retrieved from "https://age-of-wonders.fandom.com/wiki/Age_of_Wonders:_Shadow_Magic?oldid=4091"
Community content is available under CC-BY-SA unless otherwise noted.