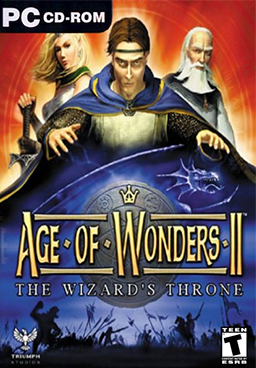 Age of Wonders II: The Wizard's Throne is a turn-based strategy video game in a fantasy setting. The first sequel to Age of Wonders, it was developed by Triumph Studios, a Dutch game developer.

Unlike in Age of Wonders, where the player has the option of removing their leader from the map, players in Age of Wonders II take the role of an immortal spell-casting Wizard, who cannot be upgraded, but in certain circumstances can survive being killed.

In contrast to Age of Wonders, the maps for tactical battles are now much smaller. This led to faster combat and less maneuvering of units. Also in contrast to its predecessor, when gaining new levels Heroes can no longer choose new skills from a list of all available skills; instead, the player is forced to choose one of three offered skills, depending on the Hero's class.

In Age of Wonders, magic is used via the spell casting abilities of leaders and heroes, and global spells can be cast some distance away from the hero; use of spells in combat is restricted to battles where a hero with spell casting is present.

Magic use in Age of Wonders II uses a "domain" system; spells can only be cast within the domain of the casting wizard, or the domain of an allied wizard. Magic domains can overlap with each other, and in the simple case, are centered on the Wizard. When a Wizard is present in a Wizard's Tower, the radius of the domain increases significantly, and in addition is radiated by other Wizard's Towers, Magic Relays and Heroes under the control of the player. Global spells can only be cast by the Wizard, via a spell book located in the main user interface; spells can be cast in combat by either Heroes involved in the battle, or (provided the battle takes place inside their domain) the Wizard who controls any party which entered the battle.

Each sphere is mastered by two wizards (except Cosmos), only three wizards do not have a seat in the Circle of Evermore:Julia, Queen of the Elven Court; Meandor, her brother and former leader of Cult of Storms; and Merlin, a Human King.

The other wizards are:

The Age of Wonders games were released in a time where most ISPs provided open SMTP servers, not requiring explicit authentication or any encryption. These days, and since the age of SPAM, those kinds of SMTP servers are rare. The development of SMTP servers over time effectively broke the play by email automatic-send function of the game. Players could still use the manual sending option, to use their own email client, but this involved manual repetitious actions for each game played.

Recently though, a group of Age of Wonders fans have been working together to develop an application to restore the automatic send ability. The Age of Wonders Email Wrapper is a lightweight application that is run on the same PC as the game. It works by emulating an open SMTP server and accepting SMTP requests from the game.

When the game sends an email it will connect to the Age of Wonders Email Wrapper, as it would a real server, to send the email. The Wrapper then receives the email and sends it out over the internet using a modern SMTP server specified by the user and with whatever authentication or encryption is necessary.

The Wrapper can also download email games from IMAP and POP3 email accounts. So it essentially encapsulates the entire Email functionality of the game.

Improved audio quality and graphics, sub-quests from various gods, more races and build options as well as two large single-player campaigns made most of the large fanbase of Age of Wonders happy migrating to Age of Wonders II: The Wizard's Throne; this was aided by the involvement of members of the HeavenGames community in suggestions, testing and development of the game.

Probably planned as an expansion pack, Age of Wonders: Shadow Magic was published later as a stand-alone game.

Retrieved from "https://age-of-wonders.fandom.com/wiki/Age_of_Wonders_II:_The_Wizard%27s_Throne?oldid=4559"
Community content is available under CC-BY-SA unless otherwise noted.