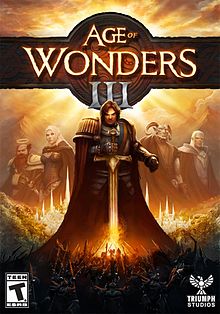 Age of Wonders III is a turn-based strategy video game in development by Dutch developer Triumph Studios, and was announced on February 6, 2013 following a successful digital re-release of the original series. It will be released on March 31, 2014 through digital distribution, as well as through retail in select territories.[1]

Before the events of the first game, the elven court was decimated by humans, an invasive race new to the Blessed Continent at the time. The elves split into two factions. The son of the slain king Inioch, Meandor, led the dark elves and the Cult of Storms, a group that intended to wipe out the humans. Inioch's daughter, Julia, led the wood elves and the Keepers, a group that had no genocidal intentions. These factions and others clashed in the Valley of Wonders, around the ruins of the razed elven court. The High Elf race was founded many years later when Julia married a dark elf and reunited their two races. Meanwhile, the Commonwealth Empire began as a joining of races for mutual protection and the sharing of knowledge. Though it set out with benign intentions, once the Empire was through expanding, humans seized power and pushed forward with technology and commerce.[5]

The Commonwealth Empire means to sweep aside the old ways and assimilate the world. The Elven Court takes exception to this, and wants to rally the ancient races to stand in defense against imperial ambitions, hence the central conflict of Age of Wonders III.[6]

Age of Wonders III is a high fantasy game in which the player assumes the role of a political-military leader. Gameplay is chiefly concerned with exploration, resource and infrastructure management, and defeating your opponents in battle, though diplomacy does figure in; one major game option in previous games in the series is whether or not more than one player can achieve victory by means of an alliance. As in the case of the first game in the series, Age of Wonders III offers a campaign playable from two sides, the human-centric Commonwealth Empire and the Court of the High Elves. Single-player scenarios, online multiplayer, random map generation, and an extensive map editor will offer a variety of gameplay experiences.[7]

There will be six races available for play: humans, draconians, high elves, dwarves, orcs, and goblins.[8] These are notably fewer than the races available in earlier Age of Wonder games, though it has been implied that some of the initially excluded races may be included in later expansion packs.[5][9] Unlike the previous games, the player's alignment is based not on race, but rather the player's actions and the cultures the player absorbs into their empire. As in Age of Wonders II, players will have domains, areas of influence in which the leader character can make use of his magical abilities; in this third game, however, domains will also affect diplomacy and income.[10]

The graphics of Age of Wonders III will be presented in 3D instead of the isometric view the series has utilized up to this point.[11]

Age of Wonders III is a turn-based strategy game. Units have a limited number of movement points that are restored at the beginning of each new turn. In past games, there have been two modes of turn system - simultaneous, in which players can move their units all at once in the same turn, and classic, in which players take their turns in a predetermined order.[2]

Age of Wonders III deviates from previous iterations in the series by allowing players to select their main character's skill set from traditional RPG classes - sorcerer, dreadnought, theocrat, rogue, archdruid, and warlord - as well as "specializations," on which Triumph Studios has yet to elaborate.[8]

Leaders and heroes - special, unique units who can be increased in skill and outfitted with superior equipment as the game progresses - will now be able to acquire special mounts that are more advanced than the default mount that cavalry units make use of; for example, a dread spider mount would allow a hero to bypass walls in a siege situation.[12]

New dynamics, such as flanking, have been added to make combat shorter, more intense, and more intuitive. Units now appear as multiple soldiers forming ranks instead of a single combatant, with the number of soldiers in each unit correlating with remaining hit points; this is to give combat the feeling of a battle between armies instead of a skirmish between adventuring parties. It should be noted that for the first time in the series, a full party no longer includes eight units, but six.[8]

The panoramas surrounding the new 3D battlefield will be generated according to hexes near the center of combat.[11]

Cities will provide much of the resources, most of the infrastructure, and nearly all of the units used by the player. The unit types that a city can produce are dependent on the race that inhabits that city and also on the leader's class.[8]

Independent cities and units are more complex and realistic than in previous iterations. Units that come from an unaffiliated city will fight to protect a city's domain, and they won't forget that they're tied to it. Many of these independent settlements aren't cities in the traditional sense, but can be alternative settlements, like a Giant's Keep. The player can conquer these holdings, which will provide units like a city, or they can absorb them through diplomatic means by paying tribute and completing quests on their behalf.[10][13]

Many of the developers that worked on the first game are working on Age of Wonders III. The development team is being led by founders Lennart Sas and Arno van Wingerden. Djurre van Dijk is the technical producer and Arnout Sas is on game design. Ray Bingham is writing the story and Michiel van den Bos is composing the music. Jimmy van der Have has been the chief liaison between the development team and the fan community on the official website. Markus Persson, aka "Notch," owner of Mojang and founding lead designer of Minecraft, is the investment partner.[14]

Though originally intended for release in late 2013, it was pushed back to early 2014 to allow for a greater investment of time and resources.[1]

A random map generator has been promised, as well as tools allowing for extensive, user-created content.[15]

Age of Wonders III has garnered a dedicated following and has an active online community. The development team frequently posts journals and solicits feedback on the forum. The community will be involved in testing the game, though to what extent has yet to be determined.[8]

The soundtrack is being composed by Michiel van den Bos, a Dutch musician and disc jockey whose work includes Unreal, Age of Wonders, Unreal Tournament, Deus Ex, and the Overlord series. Many of the tracks from the original game are being remade; Van den Bos has noted that the technology available to him as he works on Age of Wonders III allows him to create these tracks as they "sounded in his head" when he was working on Age of Wonders.[16]

Retrieved from "https://age-of-wonders.fandom.com/wiki/Age_of_Wonders_III?oldid=4272"
Community content is available under CC-BY-SA unless otherwise noted.