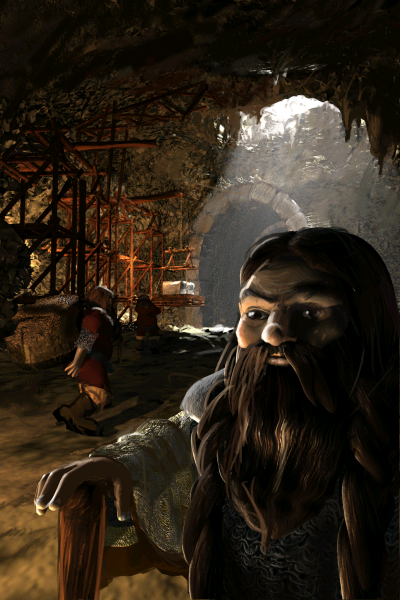 Dwarves are hardy mountain kin which live in the earth and rugged places of the land. They value strength and hard work. Their minds are slow to the subtle ways of diplomacy, preferring to strike their enemies with the force of their blows over spending inordinate amounts of energy in lengthy, sleep-inducing talk. They love to create things, and find great satisfaction in creating vast structures adorned with the treasures discovered deep within the earth. Dwarves are strong fighters, some preferring to forego armor and shields to wield two axes and pure rage. Their sure-footed strides carry them over the high slopes they reverence.

Dwarven women are sturdy and nearly as tough as their men folk. According to dwarven tradition, a dwarven male that is unable to best his wife in a show of physical strength, is called an engineer. Dwarven engineers are capable of fixing all machines, and inanimate objects. They are consigned to a life of fiddling with contraptions in the hopes of somehow discovering a way of pleasing their overbearing mate. When dwarves accumulate enough resources they create mighty machines capable of destroying entire armies and blasting holes in the most formidable walls.

Retrieved from "https://age-of-wonders.fandom.com/wiki/Dwarves?oldid=4538"
Community content is available under CC-BY-SA unless otherwise noted.