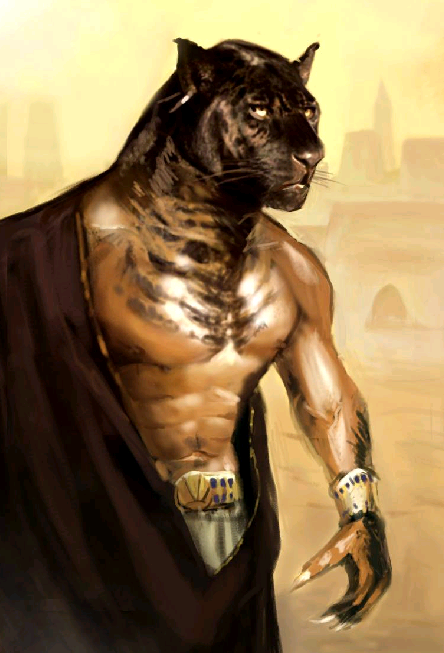 The newest race on the Blessed Continent, these savage hunters employ the powers of the great cats to stalk their foes.

Most Tigrans appear as beasts, but their appearance is deceptive. They are expert as spies, and relish the enemy that underestimates their capability.

They are quick and secretive, enjoying a rich lifestyle. They have a hunger to rule over other races, and when placed in positions of power they expect to be pampered and spoiled as any cat. Not selfless nor nefarious, they revel in self-indulgence obtained through any means necessary.

Tigrans reflect the image of their creator, the fire god, Yaka. The most powerful followers of yaka fuse with the elements of flame and can conjure bolts of fire upon command. Their homes are great structures of sandstone, which blend into the desert sands. They spend much of their time in pursuit of spiritual mysteries. They have unlocked many, and are guided by mysterious beings with the power to bend the wills of men.

The Shredder Corps are the first line of the Tigran army. They are briefly trained with the basic weapon of Tigran society, the Skalj, a small serrated blade that can be swung or thrown at the enemy. The Skalj is the perfect weapon for the unskilled Tigran soldiers, as it is used commonly in their everyday lives.

Tigrans like to feel the thrill of the hunt, even when eating prepared food, so they use Skalj to tear into everything from immensely popular roast fowl, to the considerably less popular bowl of soup.

Hunters are a sect of Tigran society that has shunned the so-called 'progress' of their culture, in favor of a return to simpler times. Hunters have disdain for city lives, preferring to live in the wilderness as their ancestors did. As a sign of the strength of their beliefs, Hunters also refuse to walk on two legs, insisting that they had no hands, only four feet. Over the years, their bodies gradually bent and grew into the shape Hunters preferred, until they truly were four-legged creatures once again. Shortly thereafter, other groups of Tigrans tried to convince their bodies that they had various endowments, without success.

The aptly named Fire Cat has an affinity for flames, and a magical gift that allows them to summon fire into their hands at will. Fire Cats love combat of all kinds, as it allows them to unleash the full fury of their skills, instead of being limited to the everyday drudgery of lighting lanterns and reheating cold food.

Tigrans have had an easy time domesticating all of the lesser forms of feline life. They look upon the more primitive cats as their children, and consider it their primary responsibility to act as the protectors of these infant creatures and their homelands. Tigrans do make use of the lesser cats though, from using smaller felines as messengers, to using the great cats as mounts to ride into combat. Like all their kind, each Cat Master has a very close, Symbiotic relationship with their animal companion, each protecting the other from harm.

The nimble Prowler finds no shame in skulking about in shadow, only glory. When not in times of war, Prowlers commonly seek work as assassins, honing their craft for profit while waiting for their people to need their skills once more. A Prowler was once known to have stayed within a bag of foodstuffs for over a week while waiting for it to be delivered to an unsuspecting Duke. Upon the opening of the sack, the Prowler pounced at the Duke as if fully revitalized. After slashing the Duke's throat, he leapt out the window and scaled the walls to escape, leaving behind only a pool of blood, and a very smelly bag.

Prowlers' agility allows them to climb walls with ease. If they can attack while on the move, the increased speed of their Charge makes them even more deadly.

The life of a Mystic is one devoted entirely to the exploration and obfuscation of reality. Tigran Mystics are commonly seen performing 'magic shows' for children and adults alike, but these exhibitions are rarely what they seem. In truth, the Mystic needs little concentration to trick commoners, but instead focuses on wheather any in the crowd can see through their ruses. Those who perceive the truth are allowed to become Mystics themselves, for you cannot seek out the life of a Mystic; it must find you.

Mystics can easily see hidden foes, whether physically or magically concealed. They can teleport short distances, and blur their shape to make them more difficult to strike.

The product of either a deranged magical melding, or a string of extremely painful courtships, the Manticore has the body of a lion, the wings of a dragon, and the tail of a giant scorpion. Its face and mind are truly Tigran in origin, giving it at least four distinct creatures in its lineage. Whatever lies behind the enigma of its ancestry, the Manticore is certainly a fearsome warrior, able to swoop down its enemies with unmatched ferocity. The warrior Finnedun may have summed it up best with his final utterance before being slain by a Manticore: 'Egads! How much ale must it have taken to breed such a beast?!?'

The Beholder has a spherical body, one large central eye and a huge maw lined with razor-sharp teeth. Several omni-directional eye-stalks atop it makes it impossible to surprise the Beholder from any side. Beholders most often inhabit dank ruins in hot climates. They are extremely intelligent creatures whose many eyes and devious minds have caused rumors of the ability to see future events. Their purpose in allying with Tigrans remains a mystery.

This creature floats magically, is immune to the effects of magic, and can even project the immunity to cancel enchantments on other beings. Its gaze has been known to freeze its victims in terror, stopping all bodily functions; causing immense pain and even death.

A familiar human-like face belies the cryptic mind of a Sphinx, a distant cousin and father figure to the Tigran people. The Sphinx will offer guidance to any among the Tigrans who seek it, but their answers are often so complicated and obtuse as to be more detrimental than helpful. For the Tigrans, the real strength of the Sphinx is in its power to dominate the minds of lesser creatures, and force them to fight for it. It has been suggested that the Sphinx does this simply by projecting words of advice so dense and complicated as to completely befuddle the mind of their recipient.

A Sphinx is immune to all forms of mind control, and can Dominate the will of their enemies.

Retrieved from "https://age-of-wonders.fandom.com/wiki/Tigrans?oldid=4205"
Community content is available under CC-BY-SA unless otherwise noted.